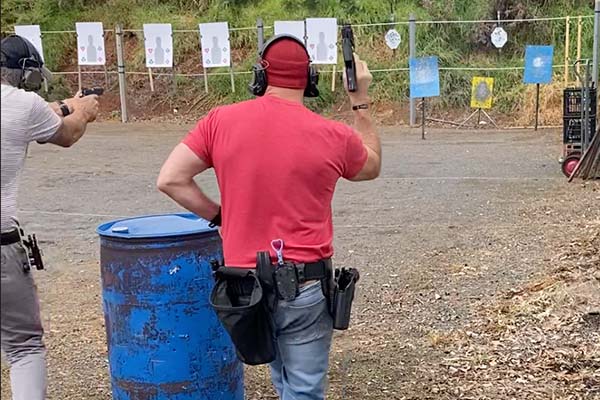 After over 30 years of teaching shooting in the ADF special forces and assorted police agencies, specialising in handgun training, most of my knowledge is difficult to explain to a weekend hunter or hobbyist. I don’t mean that dismissively, but rather the two groups (people shooting weapons and people shooting hunting firearms) are extremely different.

However, what I have come to understand is that there are two simple ways to define the skill of shooting; technical and tactical. One requires bullets and one doesn’t, but we will get into that another time. In short tactical shooting done live , is training that is suboptimal. In terms of technical shooting both a hobbyist and a professional need a solid grounding in the fundamentals of marksmanship, often described as, stance, grip, sights and trigger. You might have heard that before. My preference is; position, control, sighting and trigger manipulation. If you’re looking for ways to dig into the fundamentals (and that’s always a great place to start), by the end of this article you’ll have a new way to practice and develop your skill.

Before I start laying out my thoughts, it’s important that you determine if it’s me you should be listening to, and how I developed my perspective. That is a long, long story, but to keep it short let’s just say Hunter, Infantry, Commando, Police Officer, Competitor, Air Marshal, and shooting Instructor in the UAE Presidential Special Guard. Sprinkle in some trips to become a Master Instructor at the Sig Sauer Academy in the US and here we are. So after over 30 years of training people from all over Australia and the world (with many of those people ‘shooting for their lives’), if I were asked what aspect of technical shooting has the biggest return on investment, I’d say it’s obvious; trigger manipulation.

24 X USPSA and 7 X IPSC World Champion pistol shooter Robbie Leatham has a fantastic way of describing his keys or secrets to shooting:

Incredibly simple advice, but actually pretty hard to apply. In my experience all three rules are important, they are however not equally important. Number 3 is THE MOST IMPORTANT. I’ve encountered hundreds of trainees (who already had a solid rifle shooting base) learning to shoot a handgun as part of their new profession. I’ve consistently noted that the biggest impediment they had to achieving consistent accuracy was with rule number 3. Why? Well, in their case it’s all down to physics. It’s about the relationship between the weight of the trigger pull in rifles and handguns when compared to the weight of the weapon itself. Most striker fired handguns require about 2.5 kg of trigger pull to fire while the guns themselves weigh in the vicinity of 800 grams. Whereas with rifles the trigger pull is usually way less than the weight of the rifle.

The biggest issue I have experienced with novice handgun shooters is an inability to move the trigger without moving everything else. Luckily there is a solution that is transferable from handgun shooting to rifle shooting. It comes from the Sig Academy and is called the Bump Drill. I’ve tried a lot of different ways to learn this skill and the Bump Drill is the single most reliable way I have found. Maybe the best thing is that it’s just as useful in dry fire practice as it is live.

The bump drill it is essentially a way to lay down a fine motor skill neural muscular pathway in moving the trigger finger in a straight rearward manner and being able to understand at a subconscious level the phases of a trigger in firing, which are.

We psychologically impart a physical effect on the fall of shot because we mean for the gun to fire at a specific moment. We think, we pull and during that pull we have an intention for when the shot breaks. Mentally, shooters often do the following, I am going to make the gun go bang right NOW. This wouldn’t occur if we programmed a robot hand to pull a trigger. Our inaccuracy is often deeply rooted in our psychology and our, how do I say it, humanness.

The first step in conducting the bump drill is finding the correct finger placement on the trigger. Your hand size determines what part of your index finger interfaces with the trigger face. Think of your hand as a foot and the gun as a boot, everyone has different sized feet, but the manufacturers build guns for a generic human hand. Divide the trigger into 3 parts, top, middle & bottom. Place your finger on the bottom portion of the trigger, however, don’t drag it on the inside of the trigger guard. Place the finger on the trigger in the most natural manner that your hand size will allow. If you can pull the trigger to the rear with minimal disturbance to the sights, then that’s your correct position. Now ensure your weapon is sighted on a target that you can focus on, cock your weapon and pre-set the trigger. Focus hard on you sights and bring the trigger to the wall, pause there and feel it at a microscopic level. Think of your finger as being flat on the face of the trigger. Breath out, release the trigger and repeat. This time when you get to the wall apply a tiny bit more pressure. If the first time you bumped the trigger you applied a kilo at the wall now apply 1.1kg, meanwhile focusing intently on the sights. Relax, release & repeat, the number of repetitions you do is entirely up to you, five would be my minimum, the mission is to add more pressure with each repetition without having the sear drop…which is impossible (eventually, the break will occur and the shot will fire). What this does is teach the shooter to focus intently on the sights while moving the trigger rearward only. When the weapon does fire the intention has been removed and the shooter can begin to understand what a surprise shot break really means. An analogy I like is that you have a ball, and you are in front of a ramp, you must roll the ball up the ramp without having it fall over the edge. Each time the ball rolls back you must get it a little further up the ramp. Eventually the ball will roll over the edge, but you won’t have wanted it to.

This drill can be enhanced by the fitting of a laser in the bore when conducted dry, any movement can be observed by a spotter or simply have someone else film it. By watching the error occur you can undo all the necessary things that you are doing.

When you have developed a detailed understanding of what the slack, the wall and the break feel like, head out to the range pick a relatively easy distance that your weapon is suited to and shoot your best 5 round group with your first 5 rounds in a supported position for rifle shooters. Now set up on another target and conduct a 5 round group but by employing the bump drill, you will likely be very surprised at the improvement.

Give it a crack and see if I’m right! You need to know that the bump drill is just a window into understanding it is not the end state. A more detailed understanding of the way to move the trigger rearward only and removing intention is the goal. 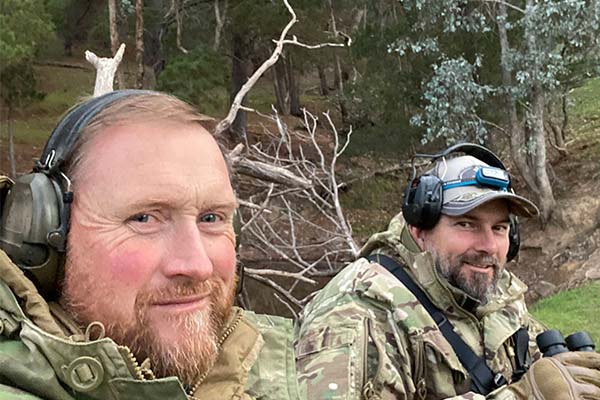 Send a message to

Thank you for taking the time to reach out to the PGS team, We will endeavour to get back to you at the earliest opportunity.

Thank you for your message.It has been sent.

Thank you for Submitting your report.

our admins will investigatethe USER asap